Former Southern Illinois Congressman Glenn Poshard has taken to the streets and sidewalks of Southern Illinois, calling for a return to peace, unity and civility amongst a bitterly divided state and nation.

Throughout the month of October, Poshard has scheduled “silent marches” in front of the courthouses of each of 39 counties he represented during his time in Congress.

On Wednesday, Oct. 7, Poshard’s tour brought him to the Union County Courthouse in Jonesboro.

With signs promoting non-violence, kindness and togetherness, Poshard led marchers in a non-partisan appeal to end the strife between political ideologies and the violence that has arisen from those divisions.

Masks and social distancing standards were observed by participants in the event.

“We have to take it upon ourselves to be the kind of citizens that democracy requires,” said Poshard in addressing the assembly “We have to speak out against the violence.”

Incorporating famous speeches from Presidents Lincoln and Kennedy, as well as the Declaration of Independence, Poshard’s oration called for citizens to take a stand against injustice and violence.

“As long as there is inequality among our people, as long as anyone is being denied justice and the freedom to peruse life, liberty and happiness, as long as these children, the next generation, our generation, are being denied the freedoms that are a gift to us from our forefathers, then, as Mr. Lincoln said, it is an unfinished work that we must address, to make sure that those freedoms are never lost to any of our people,” said Poshard.

“It doesn’t matter the race, religion, ethnicity, the politics, we are Americans.”

Quoting from Lincoln’s second inaugural address, Poshard said, “’With malice toward none, with charity for all, let us go forth to bind up the nation’s wounds, to care for him who has borne the battle, for his widow, and his orphans, to do all that we can do to insure a just and lasting peace for ourselves in all nations.’“

“Please, silence the voice of violence. It doesn’t matter where the voice comes from, be it the podium of the highest office in the land, or on the streets where people divert the peace process, the process of protest for justice, with violence,“ said Poshard.

“Those voices are wrong. Because we can never get to the guarantees of that declaration, of equality, freedom, justice, mercy, we will never get there through violence. Violence will never get us to where those principals live. It can only be done through non-violence.” 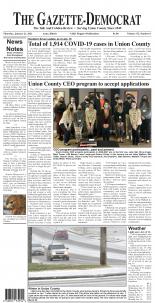