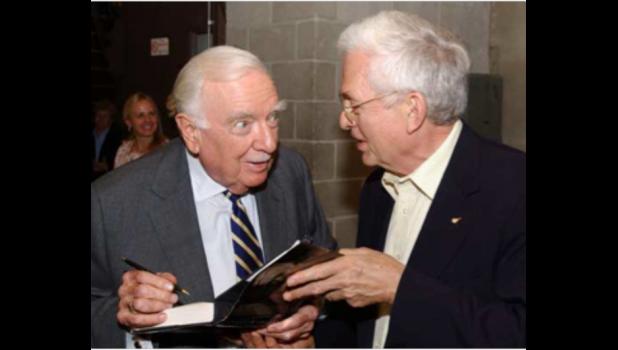 Amazon.com has released publication of a new book by Don Michel, former owner/operator of WRAJ, WRAJ-FM radio stations in Anna.

The book, “Getting to Know Walter Cronkite, Buckminster Fuller, Michael DeBakey MD, Arthur Godfrey and Ann Landers,” is available by going to Amazon.com.

The book contains 19 interviews done by Michel over a 20-year period with nationally known persons, as well as several Union County men and women.

The book includes photographs and local items about PAST and its preservation of St. Anne’s Church in Anna, Dr. Carroll Loomis and his family’s missionary activities in Malawi, movie extra and actor Bob “Zeke” Davidson and Bill “Sam” Gulley of Wetaug, who rose to become a military officer in the White House under four presidents.

Michel also interviewed the officer who arrested Lee Harvey Oswald, as well as Abraham Zapruder, the man who filmed the assassination of President Kennedy, both of which are included in the book.

Michel came to Anna upon release from active duty in the U.S. Navy shortly after WRAJ radio station started broadcasting in 1957 and moved to Dallas, Texas with his wife, Marian in 2012.

His children, Jane McGarry, who is host of the Dallas WFAA Channel 8 daily TV program “Good Morning Texas!” and David Michel, who is founder and CEO of Catapult Health with his wife Deborah (formerly Deborah Brames of Anna), are also based in Dallas.

His wife, Marian, passed away in January 2013 and he has resided since then at the C.C. Young Retirement Center, where he has interviewed many unusual residents and has written a biography of the Rev. Christopher Conley Young, the founder of the center.

A book review event is planned for the Anna/Carbondale area in the near future.