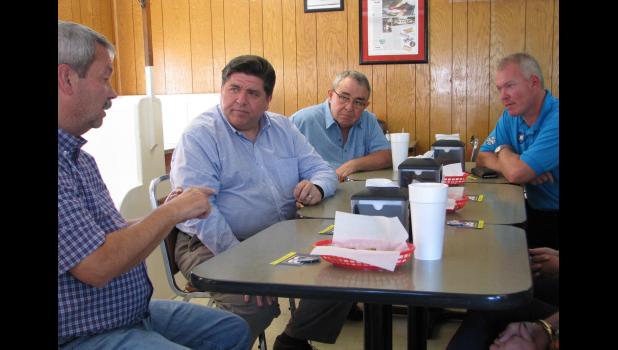 A Democratic Party candidate for governor in the March 2018 primary election paid a visit to Union County last week.

JB Pritzker of Chicago stopped at the Dixie Barbeque in Jonesboro Thursday afternoon, Aug. 24, for an informal meeting with Union County Democrats.

Pritzker also made a stop in Murphysboro, where he was scheduled to speak at a Jackson County Democrats dinner.

The candidate addressed concerns about the economy, jobs and the infrastructure during his visit.

“All are under siege by Bruce Rauner...and Donald Trump, too,” Pritzker commented about the reason he is running for governor.

Pritzker, who is an entrepreneur and business person, said that he is the “only candidate who has created jobs.”

He said he would work to build prosperity and help the people of Illinois to create businesses, including small businesses.

“We need a governor who is actually not bad-mouthing the State of Illinois,” Pritzker stated. “Everything he says about Illinois is bad.”

He also addressed concerns about infrastructure in Illinois, education (including early childhood education) and the wages paid to the state’s workers.

The candidate suggested that the current governor “does not understand working class people in Southern Illinois.”

“I really want to put Springfield back on the side of working families,” he said.

Pritzker said he would work to bring people together. “There’s too little of that going on in Springfield today,” he said.