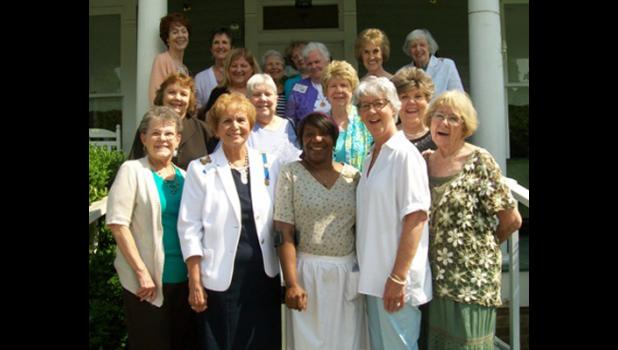 The Daniel Chapman Chapter Daughters of the American Revolution had its regular meeting Monday afternoon, May 14, at the historic Hotel Metropolitan, built as an African/American hotel in Paducah.

Following the ritual, the regent’s welcome by Doda Starkey and a business session, a program was presented by Betty Dobson, who serves as executive director of the restored vintage structure.

Dobson presented a reenactment of Maggie Steed, an African American woman who managed to get the hotel built in 1908, to house the black visitors to Paducah, who were not allowed in those downtown.

She approached a local lumberyard owner, Mr. Orr, who agreed to loan materials for the project, if Mrs. Steed would get her husband to sign the papers, not knowing she was a widow.

She forged her dead husband’s name, Henry Steed, and used her own home as collateral, in order to have the hotel built.

A local premier architect was used, the same one who had designed the White Haven mansion in Paducah.  The hotel cost $1,250 to build.

Finally, the city could welcome its black visitors to a fine hotel, entering “through the front doors.”

“Come upstairs to see the rest of my hotel!” Maggie said, with each of the guest rooms named for a famous African American person who had stayed there, such as the Ike and Tina Turner room.  Much of the furniture is original to the early days.

The rooms could be had for $3 per night for the nicer ones, or $2 for the less nice.

Photos of many of the guest celebrities can be seen on the entrance walls.

The hotel was known for its good food, and now, serving as a bed-and-breakfast, still offers its traditional biscuit-and-gravy breakfast.

Mrs. Dobson, as Maggie, said that during the International Quilt Show in Paducah, the hotel is filled with guests each April.

A quilt exhibit was held this past April by Yolande Harvey Sherrod of Waukegan, called “All Under One Sun – Africa,” with some of her wall hangings remaining on display.

Miss Maggie died in 1925 and had planned to add a third floor. Her son ran the hotel for five years following her death, and then sold it to another lady.  Women have always been the owners since then.

In the early days, when blacks were refused services in so many businesses, the hotel personnel offered hair cuts, shampoos, beauty treatments, and laundering and pressing of clothing, along with shoe shines.

With the passing of time and the changing of social events, the hotel was used less frequently and finally closed. The historic structure was condemned in the 1970s, set to be destroyed.

Betty Dobson and others interested in saving the old hotel, began the challenging chore of raising funds and actually doing some of the physical labor required to restore the two-story structure, and sometimes wondering if the renovation would ever be completed, she pointed out.

Finally, it was, and an open house was held.

Before you ask, yes, the vintage hotel is haunted, said Betty Dobson, telling of the sighting of a dark colored dog around the premises, similar to one seen on the front porch in an old photograph of the early hotel.

Also, while the renovation was underway, several workers had stories to tell of seeing or feeling unusual experiences.

Professionals were called in and determined that there was a “presence” there.

In both 2015 and 2017, Betty Dobson was invited to attend and participate at the Delta Grassroots Caucus Regional Economic Development Conference, held in the Clinton Presidential Library in Little Rock, Ark.

Following the event, its executive director, Lee Powell, described Maggie Steed as “one of the most remarkable figures in the history of the Delta,” which spans Southern Illinois, Western Kentucky, southeast Missouri, Arkansas, Mississippi down to New Orleans and east to the Alabama Black Belt.

The hotel is located at 724 Oscar Cross Ave. and can be seen on its website, Hotel Metropolitan.

A DAR District VII meeting and mini tour were planned Friday, May 25, at Kokopelli Golf Club Restaurant in Marion.

On Monday morning, May 28, the Daniel Chapman Chapter NSDAR and the Johnson County Ministerial Alliance sponsored an annual Memorial Day service on the grounds of the Carnegie Library in Vienna.  The coordinators were Cara Webb and Margaret Mathis.

The chapter was invited to an SAR memorial monument marking event  planned at St. John’s Cemetery on Saturday afternoon, June 9.

Plaques were to be dedicated for Revolutionary War veterans buried there.  Daniel Chapman members provided refreshments at the Dongola Community Center afterwards.

The next Daniel Chapman NSDAR meeting was scheduled Monday, June 11, with lunch catered by Shemwell’s, followed by a tour and program at the Cairo Public Library in Cairo.