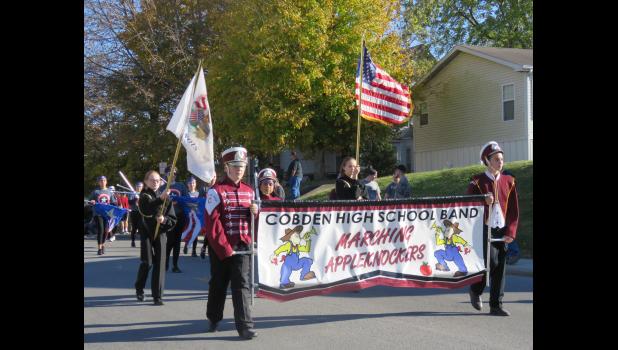 Fifty-eight junior high and high school band students are scheduled to leave Cobden Thursday evening, today, on a trip to Washington, D.C., to perform in the National Memorial Day Parade.

The band from the Union County school will perform along with marching bands and veteran units from around the country.

The band will travel in a motor coach with 17 chaperones and their band director, Jeremy Followell, who is a member of the National Guard and is stationed in the 144th Army Band in Springfield.

Cobden is set to be No. 91 in the parade. Followell said the band has been selected to represent the Vietnam era and will play the song “Hey! Baby!,” which was popular in that time.

The students started learning their audition music, the “Captain America” theme, in July 2016. A recording of the song was submitted in January, and the formal invitation arrived later that month.

“The students have been working hard to memorize their music,” Followell said in an email. “They have also spent time outside working on their marching technique...The color guard has been rehearsing after school a few hours each week to learn their new routine.”

The Cobden Music Boosters devoted a large part of the spring semester to raising money for the trip. The cost began at $827 per student, but with several fundraisers at local businesses and organizations, parents were only asked to pay approximately $500 a student. Several meals will also be provided.

The parade will be live-streamed on Youtube, Military.com, NationalMemorialDayParade.com and many other websites. Local channels also plan to show the parade. (The parade is scheduled to begin at 1 p.m. local time.)

Parade organizers warned that seeing every performance in the parade is not always possible. “Due to time constraints, commerical breaks, and other considerations, no one particular group is guaranteed television time.”