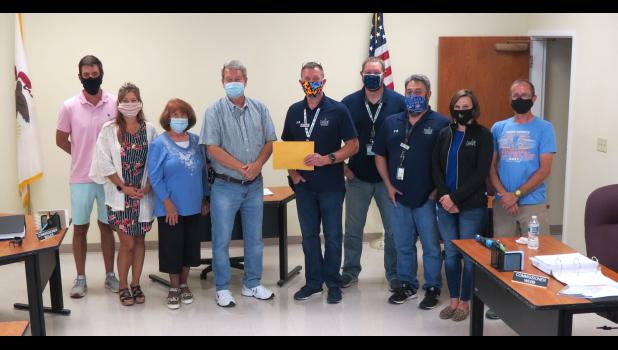 City of Anna presented with $10,000 donation

The City of Anna received a special donation during its regular meeting last week.

A donation in the amount of $10,000 was presented to city officials by representatives of the Thrive Dispensary in Anna, which sells medical and recreational cannabis products.

The donation was presented during the city council’s regular meeting on Tuesday evening, Aug. 18. The meeting was at Anna City Hall.

Thrive representative Greg Lambert announced the donation to the city. Lambert is director of security at the Thrive Dispensary in Anna. The dispensary is located at 87 Richview in east Anna.

Lambert said the dispensary is grateful for the support which the dispensary has received from the city. The donation to the city is designed to help support traffic and public safety measures.

On behalf of the city, Mayor Steve Hartline voiced gratitude and thanks for the generous donation.

In other business at last week’s meeting:

Mayor Hartline made note of the passing of Jim Miles, who had served on the city’s police and fire pension board. Mr. Miles died Saturday, Aug. 15.

The mayor said that Mr. Miles was very dedicated to the city. “He was a good man,” the mayor said.

City administrator Dori Bigler noted that the Village of Cobden had made a $250 donation to support local efforts to promote participation in the 2020 nationwide census.

A Union County Census Day event is planned Sept. 17 on the grounds of Stinson Memorial Library in Anna.

Mayor Hartline emphasized the importance of participating in the census, for the city and for all of Southern Illinois.

The council authorized two capital equipment expenditures: $2,500 for a paint striper and $6,000 for a used Falcon asphalt recycler and hot box.

The city’s current paint striper is 22 years old. Acquisition of the asphalt recycler and hot box will allow for work to be done during colder weather.

A request to use the Anna City Park for an upcoming pickleball tournament was approved.

The tournament is scheduled for Sept. 25-27 at the park. The rain dates are Oct. 2-4. Organizers have told city officials that they expect around 80 to 100 participants.