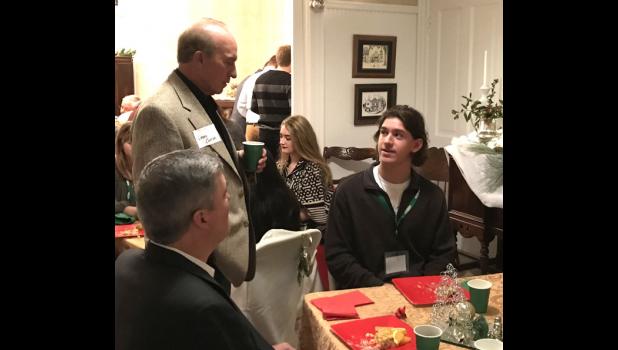 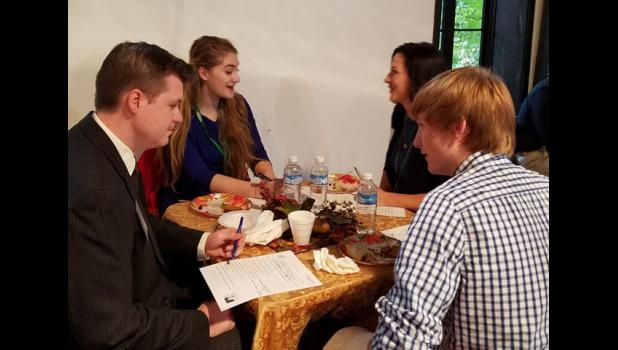 (Editor’s note: The following article, and the accompanying photographs, were shared by the Union County CEO program.)

Among the primary goals of the CEO program are for students to develop an appreciation for our local area, to build a resource network of local business and community contacts, and to strengthen their “soft skills,” such as communication, teamwork and problem-solving that will help them become leaders.

One of the best methods for teaching leadership is to give students hours of interaction with successful leaders.

CEO does just that through class business visits, speakers, and more casual events that allow for personal communication.

“Hearing our Hometown Heartbeat,” the CEO Class of 2017’s class business, which was created in partnership with Reppert Publications, identified some of the leaders with whom CEO students interact, including the members of the advisory board who oversee the Union County CEO program, the mentors who meet individually with students and offer support, and the investors and donors who financially support this two-hour high school class.

However, the list of those that interact with the students goes on.

Following are some of the leaders in those organizations who give time and resources to CEO.

The CEO Advisory Board was extremely proud of the recognition of their new facilitator, Kathy Bryan, owner of Kiki’s Coffeeshop, as the 2017 Union County Chamber of Commerce citizen of the year.

Kiki’s Coffeehouse was named new business of the year in 2013.

Kathy has been very involved in the new developments along Main Street, with heavy participation in Downtown Anna events, such as the Annabelle Hydrangea Festival, ColorFest and Christmas in Downtown Anna.

Still, as noted in the chamber’s recognition, Kathy felt a need to enrich someone’s life and make a difference in the world.

That is why she decided to pursue the CEO facilitator position.

“I love this program and the doors it opens for the students,” she said.

Union County CEO Program chair Darren Bailey noted: “The best leaders know that people make a place, and I think the strength and value of the Union County CEO program can be easily seen through the recognition of its facilitators as impactful citizens and standard-setters.

“Both of the facilitators in the program’s history have received this award, in fact, and rightfully so. We couldn’t be prouder of what Kathy Bryan does throughout the community, and especially as the leader of our program.”

The chamber has also supported the CEO students all three years of the program by giving them discounted student memberships, as well as opportunities to help plan the chamber’s winter gala, assisting executive coordinator Bonni Littleton with registration, hosting and raffles.

In fact, a glance at the Union County Chamber of Commerce annual award recipients for the last five years corresponds with the business and community leaders with whom the CEO students network. People with vision are leading students with vision.

Every business of the year from 2013 to 2017 plays a valuable role in giving time as well as money to support Union County CEO.

Other former citizens of the year who are heavily involved with the CEO program are Rusty Flamm and Charlotte Clover.

UCEDC, Where the CEO Discussion Began

The Union County Economic Development Corporation, through Alan Eddington’s awareness of the program, was the group that spearheaded the first contact with Midland Institute for Entrepreneurship’s Craig Lindvahl to try to bring the CEO program to Union County, and they have continued their financial investment pledges.

Union County Women in Business also have continued to invest annually in the CEO program and also support the program in many ways.

It is not uncommon to see students at a UCWIB meeting participating or observing as well as interacting with members in a variety of ways.

The local CEO trade show was even a part of the UCWIB trivia night.

There are many more individuals who give time and talents, but organizations with vision are giving their best efforts with time and resources to build a bright future for Union County.

“The individuals and organizations who support Union County CEO do so with little fanfare, but instead with a belief in, and a commitment to, a more prosperous future for all citizens in Union County,” Darren Bailey said.

“These young people are the future employers and employees who will lead the county into its next wave.”