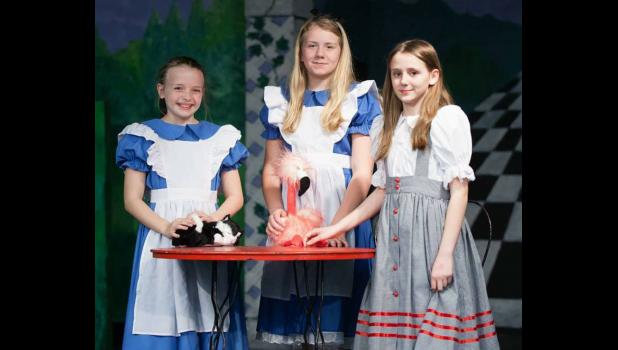 “Scenes from Alice” is an adaptation combining materials from “Alice in Wonderland” and “Alice Through the Looking Glass.”

The performances will be staged at the Anna Arts Center at 125 W. Davie St. in Anna.

Dr. Lynn Steveson wrote the adaption and is directing the play.

Steveson said the 28 cast members have been put through their paces in rehearsals.

“They are looking forward to wow their audiences and have fun too,” she said.

In addition to the long hours of rehearsal, many hours are devoted to behind the scenes work on props, costumes, scenery and whatever else the director wants.

Steveson said the crew for “Scenes from Alice” “is unique in that they are a subset of the actors, for the most part.”

For the past three Saturdays, Steveson and her crew of eight have spent several hours gathering all the props and putting them in scene numbered prop boxes and organizing them in the off stage prop room.

On the second Saturday, five cubes of varying sizes and the throne used by the King of Hearts at the trial of the Knave of Hearts have also been painted. Two chairs are in recovery at the Steveson home, and signs related to the guilt and/or innocence of the Knave has been made.

The background of a Victorian garden has been painted by Ellen Spalt, and two, three-dimensional trees have been constructed by scenic artist Kelly Rust.

The garden will be saved for the Anna Arts Center’s adult prom, which is planned May 5 from 6 p.m. to 9 p.m. Costumer Cindy Wright has created 16 garments from “scratch.”

Tickets are available from 6 p.m. to 7 p.m. Thursday, today, at the arts center; tickets also will be available at the door.