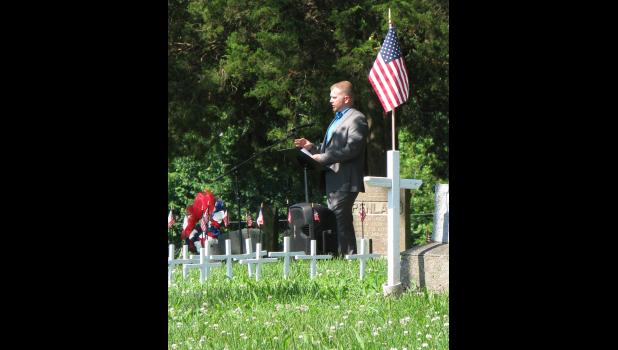 Union County joined the nation in honoring the men and women who have died in service to their country on Memorial Day, which was observed Monday, May 28.

A large crowd was on hand for a ceremony which was held Monday morning at the Cobden Cemetery in Cobden.

A Memorial Day service has been conducted at the Cobden Cemetery for many years.

An address was delivered by U.S. Army veteran Doug Meadows II, who is now serving as a Cobden police officer.

Meadows served in A Company, 1st Battalion, 32nd Infantry Regiment, in the 10th Mountain Division for four years, and went on a combat deployment to the Zahri district of Kandahar in Afghanistan.

In his talk, Meadows recalled when he attended Memorial Day services in Cobden as a child.

“But over all of those years of standing in solemn silence, listening to ‘Taps’ play and hearing the 21-gun salute, I have begun to realize something.

“That is not to say that I did not know the reason, I did, but it was something beyond my comprehension; and there is a difference.”

Meadows shared that “after growing up and serving as an infantryman in the Army, and now as a police officer, I now not only understand the purpose of being here, but I also know the reason that I did not understand. That reason is context.

“We have all heard the phrase ‘freedom isn’t free’  more than once in our lifetime,” he said.

Meadows credited “the amazing men and women whom we honor today” with helping to lay the foundation for understanding freedom.

“Being free is an absolutely amazing thing. I have met, and made friends with multiple people who have come from countries where they were not free and they have expressed their elation at the opportunity to be so.

“However, there are places that are free that are not safe. Even in this country’s history. In the War of 1812, the people of New York, Baltimore and New Orleans never lost their freedom as Americans. This is due to many of the great individuals we honor here today, but they were not safe.

“With the British invading, yes, they were free, but their safety was under great question. They had no clue when the British troops might march through the streets and begin committing the same unspeakable acts that had been committed during the Revolutionary War.

“Likewise, the people of Israel today experience a great deal of freedom; however, they do not know when the next bombing or rocket strike will happen. They don’t know on a day-to-day basis if they or a loved one will get hurt or worse.”

Those circumstances are the context which Meadows addressed.

“I know that in recent years, there have been more of these types of issues come up in our country, but that doesn’t change the fact that we have to fear these types of events far less than almost anywhere else in the world.

“This is because a great many people have sacrificed everything they had to create a sort of barrier for us.”

During his service with the Army in Afghanistan, Meadows said he lost several friends. He also met people, young and old, “who had to worry on a day-to-day basis whether or not someone was going to come harm them just because they would not grow the crops that the Taliban wanted them to.”

“This is the context that I now have,” Meadows said.

“When I finally came home, I had a rough period of adjustment because I would hear people on the SIU campus speaking about the military with disdain and making uneducated comments about what is going on overseas, or what had happened in past wars.

“I would then think about the friends I had lost fighting over there, and, to put it lightly, I would get upset.

“After some time, I had an epiphany. I realized that they just didn’t understand. That seems to be a dismissal of their views, but I promise you that in this case it is not.

“They lacked the context; they had no comprehension of the wolf at the door because the shepherd had run him off before he could even howl.

“That’s when I realized that this lack of understanding, the lack of context, was another hidden blessing given to us by our great fallen.

“Their sacrifice has not just given us freedom, but it has given us such great safety that we no longer truly understand the danger without going and seeking it out.  It is a gift that I wish that my future children will continue to receive.

“And may God bless those who have fallen to give it to us, and their families who have been left with emptiness in their lives.”

Meadows ended his Memorial Day address with one of his favorite quotes from Gen. George S. Patton: “It is foolish and wrong to mourn the men who died. Rather, we should thank God that such men lived.”