The meeting was Tuesday evening, Oct. 5, at Anna City Hall.

Fourteen students and art teacher Josh Shearer were in attendance at the meeting. Four students and their teacher presented their proposal to city officials.

City officials welcomed the proposal. Designs will be submitted to the city administrator for consideration.

Support for purchase of paint also may be provided by city officials.

The city has applied for a state Tourism Attractions and Festivals grant to help support a Christmas holiday season celebration in the Union County city. 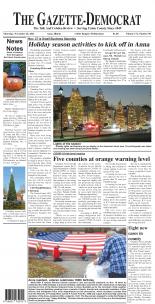