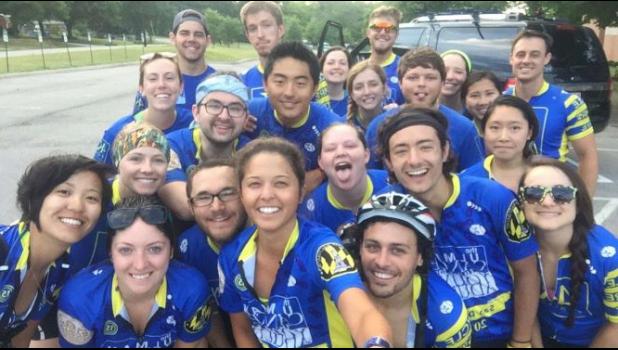 On Tuesday, June 21, Team San Diego of the 4K for Cancer organization pulled into Harvest Church in Anna for the day.

They each have been touched by cancer and the experience has inspired them to take action to help raise money and support for young adults aged 15-39 who are fighting cancer.

Christina Schroeder, a member of the team who graduated from college in South Dakota, said that it's important that the fundraising efforts are focused on young adults.

"We're going through these life changing stages during this time, so when people in that age get cancer, it robs them of so many opportunities."

Schroeder was impacted by the diagnosis of her best friend's 7-year-old cousin.

In response, Schroeder created  a fundraiser and donated 26 inches of hair alongside other volunteers.

Sonja Wagner, another rider on the team, graduated from college in Florida.

She has been diagnosed with, and survived, cancer five times since 2009.

This is Sonja's second ride with 4K for Cancer.

The team is riding more than 4,000 miles across the country to raise money for the Ulman Cancer Fund for Young Adults, an organization that provides resources and support to young adults fighting cancer.

Every rider on Team San Diego went through a thorough application and training process to ensure they understood the mission of the journey and that they were physically and mentally prepared for the trip.

The riders each raised a minimum of $4,500 to join the ride.

Three other teams of riders and two teams of runners are participating this summer with 4K for Cancer.

The organization's fundraising goal is $1 million for the year. They are currently past three-quarters of their goal.

To learn more about 4K for Cancer and the Ulman Cancer Fund for Young Adults, go online to 4kforcancer.org or ulmancancerfund.org.

To follow Christina Schroeder and Team San Diego's journey as they complete the 70 day ride, go to onesmallbike.wordpress.com, or follow Sonja Wagner at myepicjourney.net.