Illinois State Police District 22 is planning to conduct alcohol countermeasure patrols during May in Union County.

Plans for the patrols were announced by Capt. Michael Alvey, who is the commander of District 22.

Alcohol countermeasure patrols allow the state police to focus on preventing, detecting and taking enforcement action in response to violations associated with impaired driving and illegal transportation or consumption of alcohol or drugs.

The state police have zero tolerance for impaired driving in Illinois.

Officers working the detail in Union County will be watchful for drivers who are operating vehicles in an unsafe manner, driving with a suspended or revoked driver’s license and transporting open alcoholic beverages.

The state police especially will be watching for driving under the influence violations, safety belt and child restraint use violations, speeding, distracted driving and all Illinois vehicle code and criminal violations.

The state police noted that alcohol and drug impairment are factors in more than 30 percent of all fatal motor vehicle crashes in Illinois.

There is one alcohol-related traffic fatality every 53 minutes in the United States.

The alcohol countermeasure enforcement program allows officers to work even harder at removing dangerous DUI offenders from the road.

The detail project is funded through the Illinois Department of Transportation. 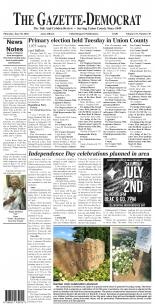