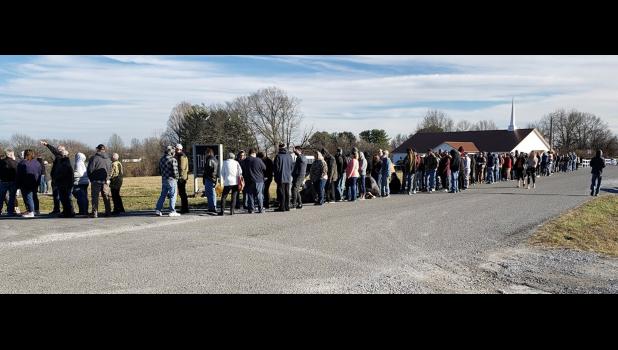 Thu, 01/09/2020 - 5:12pm admin
As the clock ticked down to midnight on New Year’s Eve, many dispensaries were reporting long lines outside their stores, in some cases stretching around their block.

SPRINGFIELD – The first day of legal sales of recreational marijuana in Illinois went “extraordinarily well,” according to one industry representative, with total sales on Jan. 1 of nearly $3.2 million.

“I just cannot express the gratitude from the dispensary operators to our customers about their courtesy and civility and patience. It was really a lovely, very successful rollout, I think, on the first day,” Pamela Althoff, executive director of the Cannabis Business Association of Illinois, said in an interview Thursday.

As the clock ticked down to midnight on New Year’s Eve, many dispensaries were reporting long lines outside their stores, in some cases stretching around their block.

The much-anticipated event was made possible by passage of a new law during the 2019 legislative session, the Cannabis Regulation and Tax Act, which legalized the sale, possession and use of marijuana for people 21 and older.

Former state Sen. Toi Hutchinson, an architect of that law who now serves as Gov. JB Pritzker’s senior advisor for cannabis control, reported during a news conference Thursday, Jan. 2, that dispensaries across the state conducted 77,128 transactions on Jan. 1, with sales totaling more than $3.1 million.

That happened despite a few snags on the opening day of sales, Althoff said.

First, she said, there were glitches in the software that dispensaries use at the point of sale, which contributed to long wait times.

Previously, dispensaries were allowed to sell only to qualified medical patients, but now they must keep close track of both medical and recreational sales, which are taxed differently.

Adjustments made by the software company to address that change, Althoff said, caused a few problems.

“There were a few glitches, not everywhere, but in a few of the dispensaries,” she said. “...but my understanding is that they were rapidly corrected. But it did add to some of the wait times that people experienced.”

In addition, she said, many dispensary operators had made design changes to their stores to accommodate a larger retail clientele, but state officials had not yet inspected all of those changes and some dispensaries were unable to open for recreational sales on Jan. 1.

And then there were issues of supply. Under the new law, Althoff said, medical dispensaries, which were the first to receive licenses for recreational sales, are required to keep a 30-day supply of marijuana products for their medical customers, leaving only a limited amount of inventory available for recreational customers.

She said supply shortages are expected to continue until April or May, when cultivation centers that have been licensed to grow recreational marijuana reap their first crop.

On Tuesday, Dec. 31, Pritzker issued 11,017 pardons that will lead to the expungement of records for people with low-level marijuana convictions.

Eventually, Pritzker’s office said, more than 700,000 criminal records will be expunged under the new law.

Thursday, Jan. 2, marked the deadline for people to submit applications for the next wave of dispensary licenses.

As many as 75 new licenses will be issued May 1, with priority being given to “social equity” applicants: people with previous marijuana convictions, their families and people from areas of the state with high crime or child poverty rates.

A share of the revenue the state receives from recreational marijuana sales is earmarked for the new “Restore, Reinvest and Renew Program” to fund community projects in neighborhoods that, in Hutchinson’s words, “have been hardest hit by the war on drugs.”

Other revenue is earmarked for a Cannabis Business Development Fund that will provide grants and low-interest loans to social equity applicants to help pay part of the startup cost of launching a marijuana-related business.