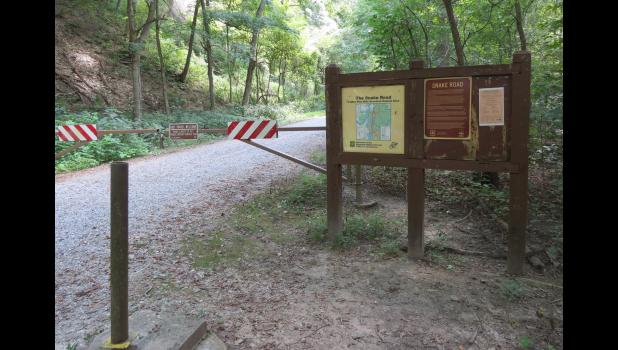 A Union County landmark is featured in an annual publication which is distributed nationwide.

The Snake Road, located near Wolf Lake, is highlighted in an article which appears in the 2020 edition of The Old Farmer’s Almanac.

The article, with a headline reading “Where Glaciers Stopped...and Traffic Halts for Reptiles,” was written by Michael Jeffords and Susan Post.

Jeffords and Post are the authors of “Exploring Nature in Illinois: A Field Guide to the Prairie State,” which was published in 2014 by the University of Illinois Press.

Along with the Snake Road, the article features the Garden of the Gods Recreation Area near Harrisburg.

Southern Illinois’ geology – “massive outcroppings of ancient sandstone, limestone, and shale bedrock, weather and exposed” – is noted in the article.

“This area, extending across the southern part of the state from near the mouth of the Wabash River in the east to the Mississippi River in the west (approximately 80 miles), is known as the Shawnee Hills and contains the 289,000-acre Shawnee National Forest.

“Cloaked in deep forests interspersed with cool ravines, these mammoth rocks mark the southernmost extent of the great North American continental glaciers of the Pleistocene epoch (said to have begun some 2.6 million years ago and ended 11,700 years ago).

“This area avoided burial by glacial soil and rock deposits that filled in much of the landscape to the north” in Illinois. “As a result geological diversity is on display.”

After focusing on the Garden of the Gods Recreation Area, the authors of the article turn to the LaRue-Pine Hills-Otter Pond Research Natural Area: “a 5x2-mile strip of rugged forestland bordering a large swamp along the western edge of the Shawnee National Forest.”

“It’s the reptiles and amphibians, however, that hold a special place of honor,” the article continued.

The road at the base of the bluffs...officially LaRue Road No. 345, but more often known as Snake Road...is closed from March 15 through May 15 and from Sept. 1 through Oct. 30 for the migration of reptiles and amphibians from the bluffs to the swamp...and then back again.

“It is the only road in the United States that is closed biannually for snake (and other reptile and amphibian) migration,” the article stated.

The authors concluded their article by declaring that LaRue-Pine Hills-Otter Pond “is truly Illinois’s version of the Garden of Eden.”