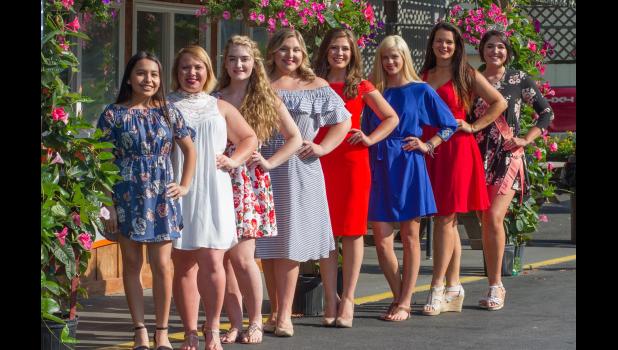 An annual celebration of the local peach harvest is coming up in Union County.

The 2017 Cobden Peach Festival is planned Friday and Saturday, Aug. 4-5.

Most of the Peach Festival events take place at the Cobden Community Park in Cobden.

The Peach Festival is presented by the Cobden Lions Club, with the help and support of other community members.

The 2017 event will be the 80th edition of the Peach Festival.

Proceeds from the festival are shared by the Cobden Lions Club to support a variety of community activities and programs.

For many people, the Peach Festival is a homecoming.

Highlights of the Peach Festival include a queen pageant, a parade, entertainment, a run/walk event, carnival midway rides, food, bingo and other games, raffles – and lots of peaches, peaches and cream and other treats.

The festival is scheduled to begin at 5 p.m. each day.

A Peach Festival parade is planned at 4:30 p.m. on Saturday. The parade route is through downtown Cobden.

More than 50 prizes will be awarded in this year’s Cobden Peach Festival raffle. Raffle tickets are $1 each, six for $5 and 24 for $20. A drawing for the raffle is planned Saturday night.

The Union County Museum in Cobden plans to have extended hours during the Cobden Peach Festival.

The museum is scheduled to be open from 9 a.m. to 6 p.m. on Friday and Saturday, Aug. 4-5 – those are dates of the Peach Festival.

The museum is located along South Appleknocker Street in downtown Cobden.

The exhibit features photographs of sports teams from various eras and locations.

A salute to the 1964 Cobden Appleknocker basketball team will be included, along with several other noted Cobden sports teams.

The photos are from the museum’s collection. The exhibit is scheduled to run through late October.

The Shop by the Museum also is scheduled to be in operation and will feature recently stocked items.

Proceeds from the shop go toward the operation of the museum.

After the Peach Festival, the museum’s normal hours are Saturday and Sunday, from 1 p.m. to 5 p.m. each day.

More about the photo:

The 2017 Cobden Peach Festival queen candidates were joined by the reigning queen for a group photo. From left are 2017 candidates Alejandra Lopez, Jericha Carter, Grace Pitts, Olivia Gordon, Janna Harner, Brooklyn Miller, Kaitlin McWhorter, and reigning queen Karlyn Furry. The pageant is set Friday and Saturday nights at the festival, with a coronation on Saturday. Photo by Tiffiny Dillow for The Gazette-Democrat.