When the Jonesboro Gazette first was published in 1849, the newspaper served one of the most important communities in Illinois during a time not far removed from when the region was a dense wilderness.

Getting from a start a century and a half ago to a milestone anniversary rarely observed by a business wasn't easy for the newspaper.

The community the newspaper originally served was well established when the first issue was published in September, 1849. Jonesboro has been a town longer than Illinois has been a state. Jonesboro, along with Kaskaskia and Shawneetown, were the state's only significant settlements in the early 1800s. Bears and panthers still roamed the heavily wooded hills of the region, and defenses were in place to ward off hostile Indians.

By the time the newspaper was established, Jonesboro was the hub of regional activity in a changing culture which had largely left behind its ways of a frontier settlement. By 1858, another newspaper, The Democrat, was established in Jonesboro, but soon moved to Anna where it was renamed The Anna Democrat

Newspapers of that day were blatantly political. Few took middle ground and subscribed to today's efforts toward balance and fairness. That factor led to one of the biggest obstacles encountered in the newspaper's 150 years.

Sentiments for the north and south were clearly divided in Union County and those of the Jonesboro Gazette obviously had a southern slant to them.

The result was the newspaper's loss of its constitutional right to freedom of the press. Darrel Dexter's book "A House Divided," tells of May 15, 1863, when the newspaper received the following communications:

Sir: Owing to what I consider disloyal articles, copied from other sheets and tacitly endorsed by your paper, I consider it wholly unfit for circulation in this already disaffected portion of the  state. You will therefore permit no more papers to leave the office till further notice. My guards are ordered to close the doors immediately.

The paper remained closed for about 10 months and was allowed to resume publication March 5,1864. The government's unusually harsh action did little to change the attitude of the newspaper's publisher and editor, as evidenced by a Jonesboro Gazette report on President Lincoln's birthday: " President Lincoln was 55 years old on the 12th of February. What a pity he was ever born."

As times changed, so did the newspaper. After recovery from the Civil War, the county's population began to grow. Anna, Cobden and Dongola, all on the path of the Illinois Central Railroad, became important towns in a region that was thriving on agriculture and light industry.

Growth and prosperity followed through the turn of the century. Then World War I, followed by the Great Depression, World War II and all the developments of more recent history.

Just as a grocery store on every corner gave way to a few supermarkets, the newspapers experienced consolidation. Mr. and Mrs. H. Clay Reppert came to Anna in 1939 and purchased The Anna Democrat. They soon acquired the Jonesboro Gazette, The Anna Talk and Cobden Review. On Oct. 26, 1939, the newspapers were consolidated to form The Gazette-Democrat.

Mr. Reppert remained editor and publisher until his death in 1951. His wife, Lewida Reppert, then took over with the assistance of John Vicenzi, and later the Repperts' three sons, John, Joe and Jerry. In 1969, Jerry Reppert became publisher, a position he continues to hold today.

The newspaper has changed immensely from the time it began in Jonesboro 150 years ago. Technology allows far more pages and better reproduction than existed with hand-set type on a single sheet.  We refrain from expressing personal feelings about presidents and anyone else. Politicians of either party have equal access to our paper.

Some things haven't changed. Our main focus now, like then, is the people of the Union County area. What's best for them is what interests us. And so may it ever be, for another 150 years and beyond.

More pages from this section: 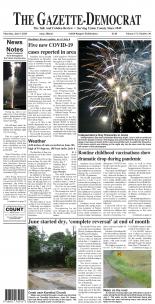